How do I handle serial numbers with a negative On Hand quantity?

Either void transactions that made the serial number negative or create a new positive transaction, such as adjustment, on or before the date it went negative in order to balance it out.

How to find serial numbers with negative on hand

To get a list of serial numbers in your database that have negative on hand, you can use the Inventory Lot/Serial Report.  However, by default, the report configuration doesn't have a filter for On Hand quantity.  To add it, go to File > Configuration Management > Reports > Report Catalog and expand Inventory Warehouse to find the report.  Enter edit mode and click on the Selection Prompts tab.  Click into the empty bottom row's Field column and use the lookup button to add LotSerialInventory.OnHand.  Be sure to save your changes. 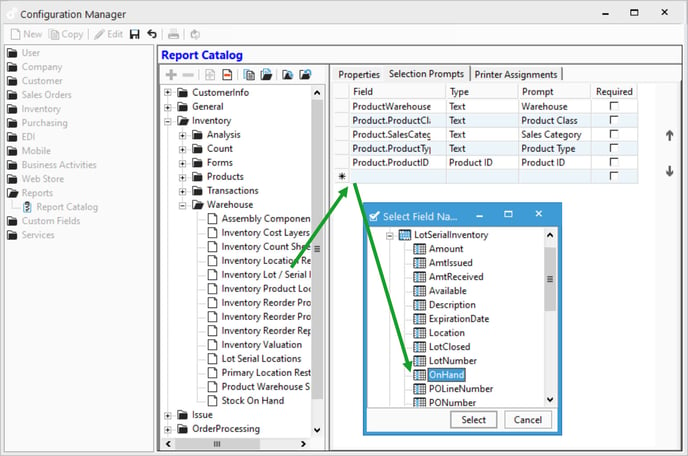 Now that this filter exists, you can go to Inventory > Inventory Management Reports > Warehouse and run the Inventory Lot/Serial Report.  When the Selection Criteria window appears, change the On Hand filter to be "Less than" and enter "0" for the value.  Upon running the report, it will generate a list of every lot/serial number that has negative on hand.  You can use that filter to also find those with more than one on hand as well if needed. 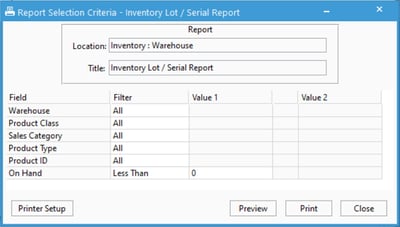 How do I fix the On Hand quantity for these serial numbers?

To resolve negative quantities for serial numbers, you can either void the transactions that are causing it to be negative or you can instead create positive transactions to balance the negative number out.  If you're not sure which you would prefer to do or need the session numbers to void, go to the product window of one of the serial numbers in your list and open the Transactions tab.  Be sure to change the warehouse to the one showing in the report's record.  Then, use the "Look for" field to enter the serial number. 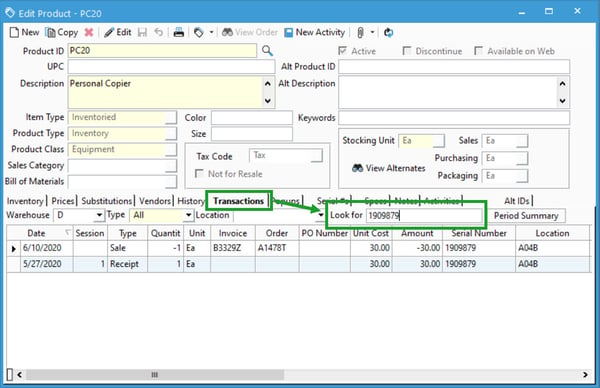 When it comes to posting positive transactions to fix negative inventory, many different kinds of transactions can work but an Adjustment is probably the simplest since it will apply the appropriate unit cost automatically.  However, since Acctivate won't allow any transaction to be posted that would leave a portion of a serial number's history to be negative, you would need to post new positive transactions before the serial number had a negative on hand quantity.  If posted after, Acctivate will notice that the transaction history of the product will show negative on hand at some point in the history before it was resolved and prevent the transaction from being posted.  Because of this, make sure your new adjustment or receipt adds the inventory prior to when it's taken away in the history.

If using receipts for your adjusting transactions, be sure to use the proper unit cost of the serial number(s) used.  The values are different, you could easily end up with an on hand quantity of zero but still have a inventory value remaining!

How does this happen?

While Acctivate has measures in place to prevent users from posting transactions that would cause a serial number's On Hand quantity to be something other than zero or one, it is still possible for serial numbers to a different on hand quantity.  The only reason it is possible is because the Void Inventory Session function is unrestricted in what it can void.  In other words, it doesn't have any checks that would prevent a user from voiding a particular transaction.  This unrestricted power in the software makes it something that should be considered an administrative ability, or at least handled as such. 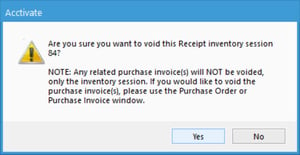 To understand how voiding a session can cause negative inventory, assume that you had a serial number that you have received on a PO and then sold at a later date.  In the transaction history, this creates a receipt that adds one to inventory and a sales invoice that removes one from inventory.  Afterwards, the Void Inventory Session tool is used to delete the receipt.  Now, the only transaction history remaining for that serial number is the sale.  This leaves the on hand quantity at negative one since the initial transaction is gone.  The warning that appears (as shown above) when attempting to void a receipt transaction talks about this.  For more details on this kind of situation, take a look at this article.

A common reason we have seen for this situation to occur is that a company has a serial number that was received and later sold.  However, at some point, it was recognized that the cost entered on the receipt transaction was incorrect.  The receipt is voided with the intention of being recreated for the same serial number but a different cost.  Unfortunately, the wrong serial number is entered on the receipt transaction which leaves the original serial number still negative.  This also creates an extra serial number with positive on hand that isn't actually within their inventory.  In these kinds of situations, you can either re-enter the new receipt done before or create an adjustment that removes the positive on hand and adds back the negative on hand.  Keep in mind that, for both of these serials, a positive transaction would need to take place before a negative one.  Generally this means you will need two adjustment sessions with different dates in order to address these serial numbers.